Child Psychoanalysts have consulted to educators and child care givers since the early 1900s. In Cleveland, Dr. Anny Katan began consulting with the Day Nursery Association in 1947, developing a relationships that have been continued to this day by other child analysts at Hanna Perkins Center [HPC]. In the 1980s, with support of local foundations, the HPC consultations expanded to include many more child care centers in Cleveland and, in the 1990’s, the TRW Foundation provided a ten year grant enabling HPC child analysts help set up psychoanalytic consultations at select child care centers in San Bernardino, San Diego, Dallas, Phoenix, Detroit, and Huntsville, Alabama 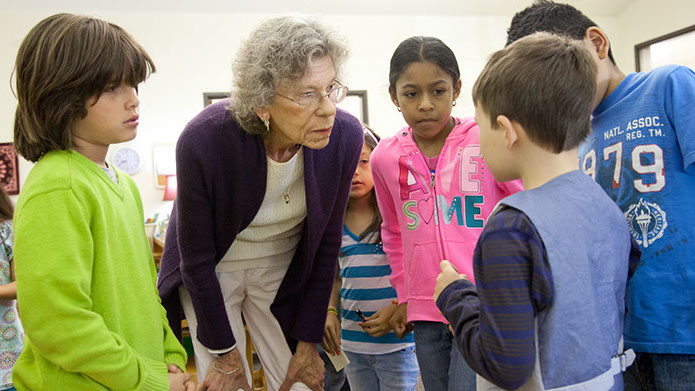 What we have learned over the years is that effective consultation takes time, requires respect for the relationships caregivers have with the children in their care, and is informed by a deep understanding of the stresses child care poses for children, caregivers and parents. The agent of change is always the daily caregiver, who knows and responds to the child on an intuitive level, and whose affective communications with the child have a far greater impact than any specific intervention techniques or even of the child’s work with an individual therapist.

We have found ourselves using a consultation model that involves a step by step approach: starting with making a strong relationship with the child care director; and then, under his or her guidance, making relationships with the caregivers through ongoing regularly scheduled group meetings. These meetings are focused on whatever is on the minds of the caregivers. The consultant mostly listens, and, ever so tactfully, supports the caregivers in thinking things through a little further. The discussion of interventions for individual children often occurs in the context of group problem solving: caregivers describe behaviors, and the consultant encourages an understanding of the meanings of those behaviors within that child’s internal experiences and feelings. Once a caregiver is able to consider a child’s inner thoughts and feelings, her coming up with solutions about how to help (or at least with ideas about an initial approach) follows naturally.

Developmental and psychodynamic understandings inform this work in a multitude of ways. For example the first issue may often involve assisting caregivers in appreciating the impact that first separations have on young children. In that regard it can be helpful to exchange thoughts with children about their parents in order to help them find ways to keep their parents in mind - be it through pictures, recordings, or carrying around Mommy’s sweat shirt. This process should always include assisting caregivers in understanding the typical defenses with which even a young child may attempt to ward off feelings of sadness, confusion, helplessness or rage. For example, a child may ignore their parent at pick up time - turning passive into active - letting the parent be the one to feel left out instead of the other way around. Most difficult of all may be helping caregivers appreciate that the most out of control child is often the most frightened child, who is desperately trying to ward off an inner emotional chaos or to take control when he feels he has none.

Working at a ratio of as much as 7:1, caregivers of toddlers may often need assistance to sustain caring feelings under the impact of their own easily understandable counter-aggressions - to find ways to sustain their emotional support for unruly toddlers rather than intensify the child’s feelings of loss and helplessness (thereby fueling even more aggression!), by sending him into a lonely time out. And additionally, the importance of working with parents may be obscured by the caregivers’ and parents’ mutual avoidance. As caregivers are helped to recognize the parallel experiences of their own and of the parents’ defenses against their feelings of inadequacy and guilt, they may become more empathic and thereby more able to reach out effectively to parents for the sake of their child. For caregivers of 4’s and 5’s, understanding the normal developmental harshness as well as loving aspects of conscience development will help them better tolerate and handle tattling, lying, and other provocations from some of their charges.

Each situation is unique; and the work is far from easy. Most of us spent our first months as child care consultants dreading coming to the center, overwhelmed by the stresses we observed in the caregivers and children, confused by the multitude of things going on, at a loss to know what to say, and finding it hard to “stay with it” until we knew enough to say something. As a result of this work, however, child analysts have learned a great deal about what we may offer the world of infant and preschool center caregiving, particularly if we understand that we need each others’ support for this work.

This website was produced with the generous support of the American Psychoanalytic Foundation.